Meet: The cast of Mask! 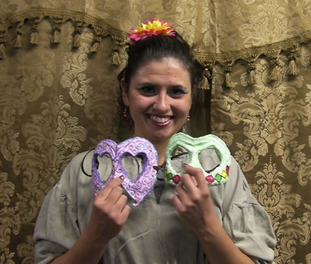 Tiffany Chandler is an Idaho native, born and raised in Pocatello. She began dancing at a very young age and developed a passion for the performing arts as she explored various forms throughout high school and college.

Tiffany received her bachelors degree in theatre at Idaho state with a minor in dance. While going through the dance program at Idaho state, Tiffany met Scott and Julie. She performed with them for several years, and continued creating and performing even after graduation.

"I love learning choreography," says Tiffany. "I love learning how people move, and taking their movement and placing it in my body. It's phenomenal to see these beginning stages and watch an entire show come to life!" From small burlesque shows to big musicals, Tiffany dances as often as she can.

While dance is her first love, Tiffany admits to having a fun little fling with acting on the side. Over the past few years she has played The Wicked Witch of the West in "The Wizard of Oz," Bonnie in "Anything goes," Cherie in "Bus Stop," and Gloria in "Boeing Boeing." Tiffany enjoys character work, and each of these shows have had strong, challenging characters that have pushed Tiffany past what she thought possible.

Even though she is involved in many performances, Tiffany keeps her day time jobs because she loves what she does. Tiffany wants to spread her passion for dance and her love for life to those around her. She is able to do this by teaching at a studio in Pocatello. Her classes range from 2 year olds to high schoolers. "My favorite age group to teach is middle school because I am able to connect with those kids so well." She also aides in a 6th grade classroom at a charter school. "I love being a role model for these girls. I love showing them that you can do what you love, despite societal restrictions. I don't fit the typical mold of a woman in her 20s living in south east Idaho, and I am perfectly happy with that. I think it's important for the kids to see a positive role model in an atypical situation."

Tiffany hopes to continue performing as well as obtain her teaching certificate, because "it's important to be happy with whatever you do, while spreading happiness to those around you." 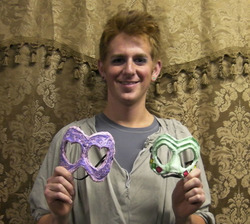 Scott Lindenberg Scott Lindenberg is an Idaho Native, born and raised in Idaho.
He has been dancing a majority of his adult life branching out from hip hop to his current home in contemporary/modern technique and physical theatre.
He currently holds a B.S. in Psychology with and emphasis in Women's Studies from Idaho State University, where he met both Julie Leir-Van Sickle and Tiffany Chandler in the context of ISU's School of Performing Arts.

Scott plans on continuing his education in dance at the undergraduate level.
Scott's emphasis in his own work is coloured by his background in critical theory
and his knowledge of breath-based acting technique, such as Jacque Lecoque's Rasas.
Scott hopes to continue to work within the realms of dance and physical theatre as he continues
in his journey to make art.

Some of his most recent performances include appearances in"Ain't Misbehavin'" and original Burlesque directed by Julie, and "A Crazy Little Thing Called Love" Directed by Bridget Close.

When he's not at work rehearsing for shows or attending dance classes,
he is most certainly eating, sleeping, or working one of his two jobs at the Idaho State University
Campus, or cracking open a beer and watching an awful B Horror Movie.